A couple of weeks ago I was invited, through contacts at Business in the Community, to deliver the keynote lecture at a symposium held by Nottingham University Business School (NUBS) on “Mainstreaming the SDGs within Teaching and Students’ Learning Experiences”. NUBS is a PRME (Principles for Responsible Management Education) Champion, PRME being a United Nations-supported initiative founded in 2007 as a platform to raise the profile of sustainability in business schools around the world, and “to equip today’s business students with the understanding and ability to deliver change tomorrow”. Laudable aims indeed, and the event started with an exhibition of some of the many student projects addressing social and environmental challenges in Nottingham and beyond. This was followed by a number of formal presentations from some of the student groups and academics before my talk in which I discussed SDG2 (Zero Hunger) in the context of the complexity of the global agri-food system. 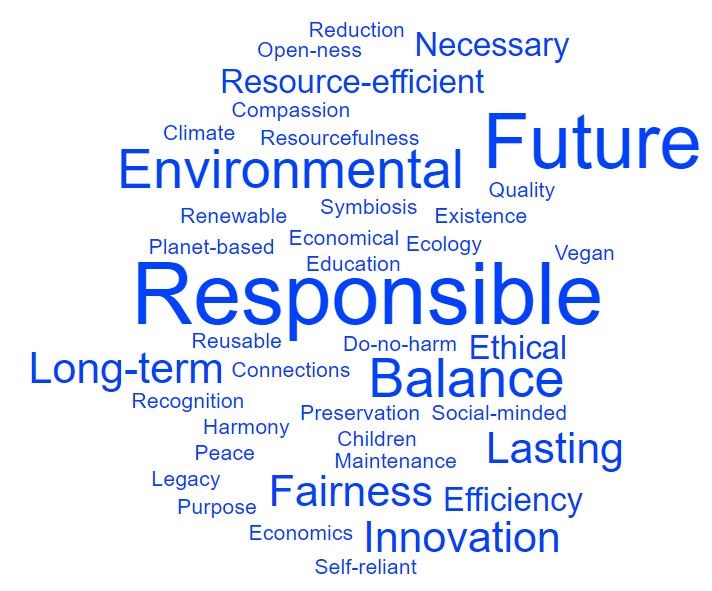 The audience was highly engaged all the way through the event, and the Q&A session was very active. I asked them for their ‘3 words which sum up the concept of sustainability’, which you can see in the word cloud above. Different groups come up with varying priorities in response to that, typified under the general headings of resilience, environment and society. The NUBS audience, primarily business and management students, gave a very heartening response. Congratulations to Dr Judy Muthuri, Chair of the NUBS Social & Environmental Responsibility Group (SERG) on the organisation of the event and I look forward to further involvement with NUBS in future.
The week after, I attended the inaugural lecture by Professor Marylyn Carrigan at Keele University, also a PRME signatory institution. Marylyn, picture below with me, spoke about her research into ethical consumerism and the challenges for both business and individuals in bringing ‘ethical’ conduct into consumption – perhaps, as queried in the billing of a Food Ethics Council debate earlier in the year, an oxymoron in itself. There are so many individual concepts bundled up in the word ‘ethical’, that there will inevitably be compromises and contradictions when people try to consume ethically. Carbon, water, animal welfare, working conditions and a host of other issues can often be at least in partial conflict in any given set of circumstances. The ability to act ‘ethically’ can often seem like a luxury of choice only available to those with resources and the imperative for the agri-food system and beyond is to make it accessible to everybody. In Marylyn’s words “since 2001 [we] have discovered the ethical consumer is multi-faceted, fluid and elusive, subject to individual, contextual, cultural and emotional whims”. On a positive note, however, she has also found that consumers want to believe that their choices make a difference. The challenge and the opportunity for the corporate world is to use that appetite to deliver the positive change which consumers want but which they may not always be given the opportunity to articulate.

The NUBS students mentioned above are clearly engaged individuals but, it’s probably fair to say that they are also examples of those who conform to Marylyn’s characterisation of ‘people with resources’. How to reach the broader population is a question to which research has found no simple answer. Those brands which have managed to put social and environmental concerns at the core of their activities are often ones which appeal to the ‘consumers with resources’ demographic. Patagonia, Ben & Jerry’s and Innocent maybe. That doesn’t mean, however, that there isn’t other research which shows that there is broader appeal. Asda, for instance, working with the University of Leeds, have found from their panel of ‘Everyday Experts’ that engagement with ‘green’ issues doesn’t vary much with age, geography or income level. Asda’s shopper demographic is broadly the same as that of the UK as a whole, so there is no reason for any business not to work with their customers to deliver on their social and environmental aspirations. Quite how to do this in any given instance is less straightforward, of course, but the consumer response to single-use plastics over the last year and the way that business and government have responded are all evidence of how change can come about.