The Secretary of State for the Environment, Food and Rural Affairs (pictured below at an earlier event) gave a remarkable speech last week, addressing many of the topics which have featured in earlier posts on this blog. He started by listing some of the most significant challenges facing human society and the broader environment. On a human scale, growing population, migration to cities, the rise in the global middle class and the demand for more, and better quality, food. In the world of technology, he referred to developments in big data, artificial intelligence and machine learning. Some of these latter terms are used rather liberally, but most of us will recognise the changes they bring. I’m typing this on a train and when I showed my e-ticket to the conductor/train-maanager (on this rail operator a task that is already merged with serving from the refreshments trolley) she told me she didn’t like e-tickets for a number of reasons, not least because they put her ‘one step closer to being redundant’.

Back to Gove, who went on to talk about pressures on the global environment; greenhouse gas emissions contributing to (some of us might veer rather more towards ‘causing’ – see the post below on Al Gore’s lecture at ICL) global warming, desertification and soil erosion reducing the space for cultivation, deforestation destroying carbon sinks and habitats, air pollution from traditional industry and intensive agriculture adding to health costs, waste poisoning the oceans or iconic landscapes under threat from development. He summarised by saying that we face the progressive loss of the natural capital on which all growth – natural, human and economic – ultimately depends. The prologue wound up with the conclusion that “any plan for our country and our world” had to safeguard oceans, clean rivers, keeping soils fertile and protect biodiversity. Readers familiar with the Sustainable Development Goals will be able to cross-reference many of them against the contents of first part of the speech.
So far, so textbook. After a brief diversion to justify the benefits of change, and how the UK’s departure from the EU should be viewed as an opportunity to address the shortcomings of the Common Agricultural Policy (CAP), he got to the meat of the speech – what we can expect to see in the future. Of course, the first concern for anyone working in agriculture and horticulture will be what it will mean for them and whether their businesses can survive the change. The first change promised was improved efficiency of the regulatory regime, a familiar theme from politicians across government. More interesting was the structure in which this improved efficiency will be found.
Four priority areas were identified for future policy; coherent food policy, time to prepare for the change, a move from subsidies towards protection of public goods and adoption of natural capital thinking. Intriguingly, this is to include public health, and other Ministries were name-checked ere and there through the speech. Gove spoke about an intent to put quality at the heart of UK food and farming. So does that lay the ghosts of ‘chlorine-washed chicken’ and all the other products of food systems beyond the EU? Maybe, maybe not. We will have to wait until the ‘spring’ for further detail. There was more immediate detail on how the post-CAP payment regime will be handled and how the activities eligible for payments will be determined. I’ll be following that up with farmers of my acquaintance to gauge the reception from within the sector. 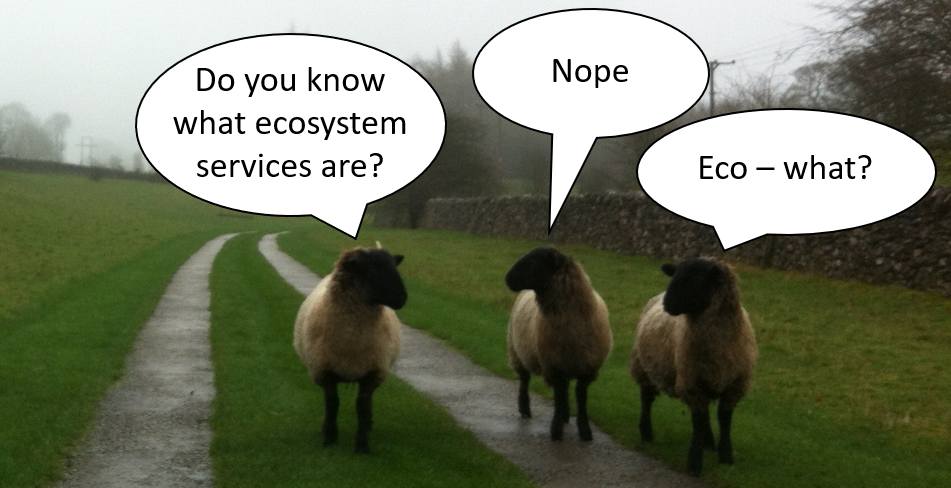 New support for those who choose to farm in the most sustainable fashion, supporting progressive & productive farming and provision of ecosystem services all featured. This will apparently be accessible to almost any land owner or manager wishing to enhance the natural environment by planting woodland, providing new habitats for wildlife, increasing biodiversity, contributing to improved water quality and returning cultivated land to wildflower meadows or other more natural states. As well as payments to individual commercial enterprises, additional money will also be made available for collaborations at landscape scale. That is particularly welcome, as I’m involved in just such a project (see various posts below). Many of the key variables impacting the agri-food sector are no respecters of boundaries!
Alongside environmental protections, there was also recognition of the need for investment in technology and skills, infrastructure, public access and rural resilience. When I speak at conferences and elsewhere, I often use the landscape of the Derbyshire Peak District (pictured below) as an illustration of the part played by agriculture in delivering something valued by others for recreation, but with no direct link between the two, especially financial. As he did in his speech at the Woodland Trust Parliamentary Reception before Christmas (see the Trees Company post below), there was an almost poetic interlude when Gove declared himself “[to be] moved by the beauty of our natural landscapes, feel a sense of awe and wonder at the richness and abundance of creation, value wild life as a good in its own right”. However, it was made clear that statutory support for public goods will only extend to areas that will not be looked after by the market.

And so to the summary. The closing words of the speech were “And that has to be the aim for all our policies on food, farming, the landscape and our broader environment. We have to embrace change which secures a more sustainable future for those who will inherit what we have built.” Overall, what was covered in the speech is consistent with what was said by Conservative Party spokespeople before the last election (see the “Greener Hustings” post below). Other political parties took a very similar line, but that was all at a very top-line level and the detail is not yet clear. There are to be no immediate conclusions and, whatever happens, there will be no silver bullet. Consultations on the detail are yet to come and, inevitably, there will be more calls on funding than the government is able, or willing, to provide. I’ll be coming back to the subject in future posts.