Something In The Air

Unfortunately, it’s carbon. In a recent post (see ‘The Science Bit’ below) I talked about IBioIC in Scotland and I’ve mentioned elsewhere on this site that I’m involved with the FoodWasteNet network. The latter is one of 13 ‘networks in industrial biology and biotechnology’ (NIBBs) funded by the BBSRC, one of the UK government research councils, to promote the growth of a more sustainable bio-economy and this week I was one of the 140+ international delegates at the biennial conference of one of its sister networks LBNet. LBNet specialises in lignocellulosic bio-refining, which involves taking otherwise unusable plant material and converting it into commercially valuable products, notably plant-based plastics.

Since the establishment of the plastics industry, according to one of the speakers, plastic production has been 9 billion tons, of which 6 billion tons (10 times the total weight of the earth’s current human population) is waste. The picture below shows litter collected along 40 metres of a roadside verge in the Peak District National park a few weeks ago; clearly it isn’t all plastic, but much of it is. 62% of plastic production is accounted for by just 5 materials; polyethylene (e.g. carrier bags), polypropylene (e.g. food tubs and pots), polystyrene (e.g. thermal insulation), polyethylene terephthalate (e.g. fizzy drink bottles) and polyvinylchloride (e.g. construction). The bio-plastics sector is still in its infancy and applications are limited. In the UK bio-plastics currently account for well below 1% of the country’s plastic consumption and across Europe, 70% of bio-plastics go into plastic bags. 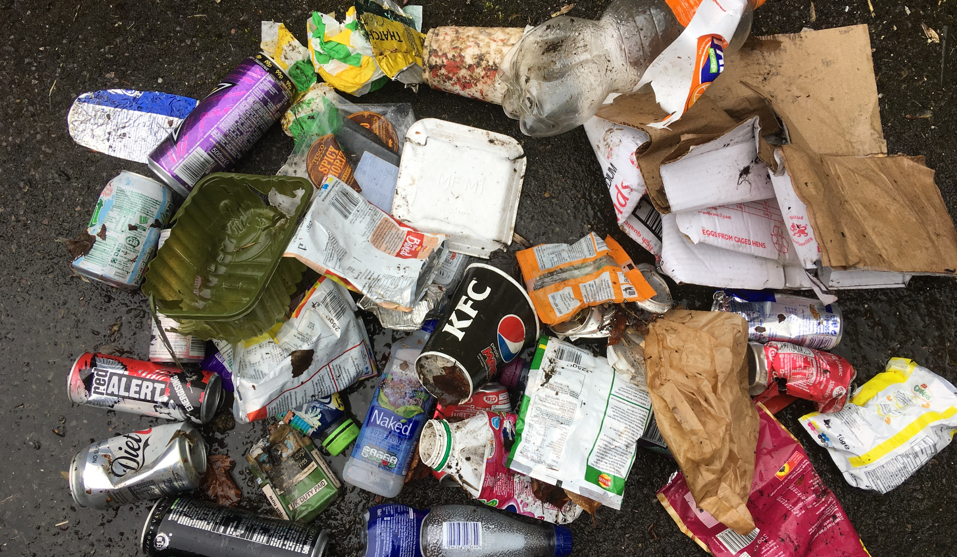 The event showed the extent of future opportunities, however, giving significant support to the view that the technology is developing at a rate that will soon see bio-plastic applications throughout the economy. The number and range of speakers was remarkable, including one of the scientists whose work on ‘plastic-eating enzymes’ has recently received widespread publicity. As well as the UK, there were presentations from Asia, North America and across Europe, covering a broad range of activity along the value chain. Overall, a heartening insight into using the power of the natural world to help deliver a more sustainable economy. Huge congratulations to Prof Simon McQueen-Mason of York University and the rest of the LBNet team for organising the event.

Earlier in the week I attended the closing meeting of another resource efficiency project, this one based on physics and engineering rather than biology. I’ve been involved for nearly three years in my corporate role and seen the project develop from concept to a full demonstration product. Also supported by public sector funding, in this case Innovate UK, the project was put together to develop novel heat recovery technology for use in industrial processes which produce ‘dirty’ exhaust gases from cooking. Dirty in this case simply means that the exhaust gases from an oven contain oil and other materials which can build up on the surface of heat exchangers and act as a layer of insulation. The new equipment was designed so as to mitigate this and retain efficiency for longer periods of operation. It now moves into a more commercial phase and I look forward to seeing how it develops.
Two years on from the COP21 meeting in Paris, a report released this week by Ethical Corporation reveals that 70% of respondents don’t believe that climate action is not proceeding at a sufficient rate to achieve the COP21 goals. I was one of the contributors to the report and sit firmly in that 70%. It is worth noting that respondents were predominantly from the private sector, so this response reflects the view from ‘the inside’. The work described above shows initiatives being undertaken to close the gap between what needs to be done and what is being done. Whilst they obviously won’t reach the COP21 targets on their own, they represent only a drop in the ocean of the scientific and technical ingenuity being directed at these global challenges. This week also saw bad news on the atmospheric carbon front, however, with an increase in the level of a key chlorofluorocarbon (CFC) in the atmosphere. CFCs are notorious for the damage they cause to the ozone layer, but they are also very potent greenhouse gases. There is a suspicion that there is a new source somewhere in eastern Asia, serving as an unwelcome reminder that short-term economics remains a key driver in some decisions.
Finally, I mentioned after my return from Malawi a few weeks ago (see ‘Out Of Africa’ below) that I would be making a donation to the World Land Trust to offset the carbon impact of my flights. It took me a while, but I eventually got round to it and the certificate is shown below. 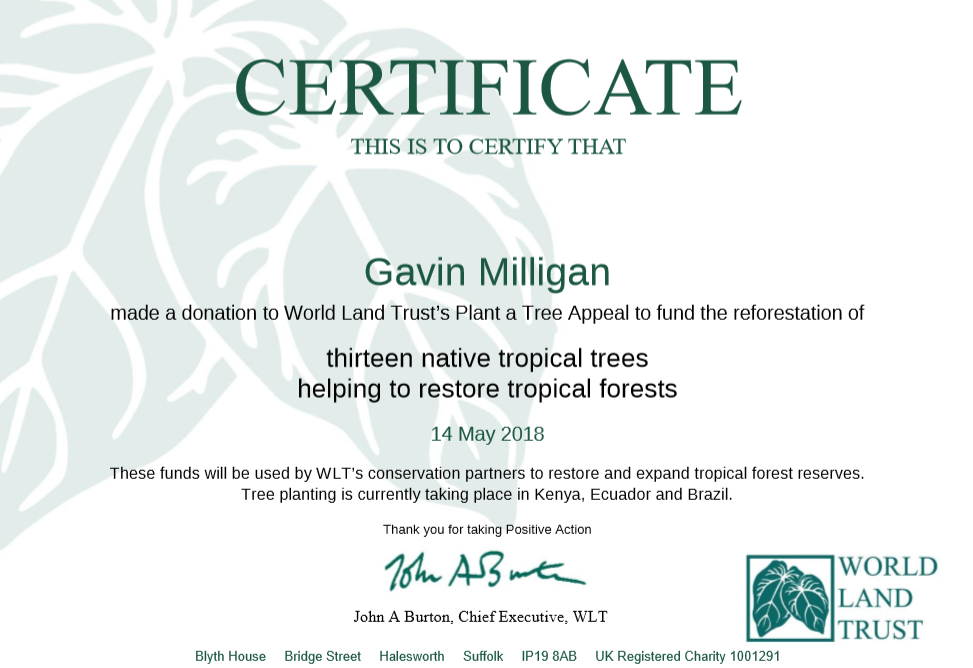 Now For The Science Bit
Bees, Leas And SDGs