Modern Slavery is a term with which people sometimes struggle to connect, evoking as it does – despite the word ‘Modern’ – images of a past that we would all like to think of as distant. Instances such as that reported in the UK media earlier this week of a 58-year-old British man rescued after living for 40 years in a shed on a residential site north of Carlisle, seem utterly incredible in a modern developed economy. By coincidence, this report came in the very week that the Gangmasters and Labour Abuse Authority (GLAA) launched new licensing standards in a bid to better protect vulnerable and exploited workers. The launch follows a consultation over the summer and approval from the GLAA board, setting out the conditions which applicants must meet to get a GLAA licence. They are all legal requirements to protect workers from poor treatment and exploitation, covering issues such as working hours, training and the National Minimum Wage.

Last week I was one of the delegates at the “4th Modern Slavery & Human Rights in Supply Chain Conference” considering, amongst other topics, the current and future implications of the Modern Slavery Act (MSA) of 2015, a piece of legislation which has had an impact well beyond the UK. Requiring organisations of above £36m turnover which are active in the UK to state publicly what steps they are taking to combat modern slavery and human trafficking in their supply chains, the MSA has had an understandable impact on businesses around the world in supply chains leading to the UK, and Australia is shortly to introduce something very similar. My part at the conference was to facilitate round-table discussions on the integration of modern slavery issues into a broader risk management context. There were 2 discussion groups comprising representatives from a wide range of sectors but, as is so often the case, many of the challenges were common. The MSA has led to increased pressure for disclosure and compliance, primarily from investors and NGOs; to quote from last week’s Investors Chronicle, “A wave of regulation and growing customer awareness of social and environmental issues means ethics now have a genuine effect on the bottom line – and that means investors can no longer ignore how clean (or dirty) a company’s profits are”. Although modern slavery isn’t a new phenomenon, as evidenced by the decades-long suspected abuse noted above, it is a relatively new topic in terms of policy. There was a general expectation that it would, over time, become as mainstream as Health and Safety and it has been propelled into Boardrooms by the backing of the Act. There is always the risk of unintended consequences in any change, and several of the contributors felt that the focus on modern slavery had taken resource away from other areas. That said, a positive consequence, possibly equally unforeseen, is that the MSA appears to be encouraging more recognition of other human rights issues in supply chains.

October 18th is Anti-Slavery Day, an annual event raising awareness of the issue of human trafficking and modern slavery. ‘Official’ figures for the numbers of people in the UK suffering modern-day slavery fall rather short of estimate of 10,000+ from those working in the area but, inevitably, firm numbers are hard to find. For a modern industrialised liberal democracy, that is a shocking and shaming number and, tragically, 40% of people rescued from modern slavery are re-trafficked, a key driver of which is a lack of economic independence. One remarkable initiative seeking to stem this is Bright Future, started by the Coop and supported (at the time of writing) by 14 other businesses and 21 charities. The member organisations use their specific resources to help get rescued victims financially on their feet. This might be by access to banking facilities, clothing for interviews or, in the case of the Coop, a pathway to paid employment. Not all of us can provide such a degree of help, but we can all help lobby politicians for improved support for former victims. Lord McColl of Dulwich has brought forward a Bill in the House of Lords to give victims in England and Wales (this is a devolved responsibility in Scotland and Northern Ireland) a guaranteed right to support for 12 months. At https://freeforgood.org.uk/#take-action you can directly contact your MP to ask them to support the bill. 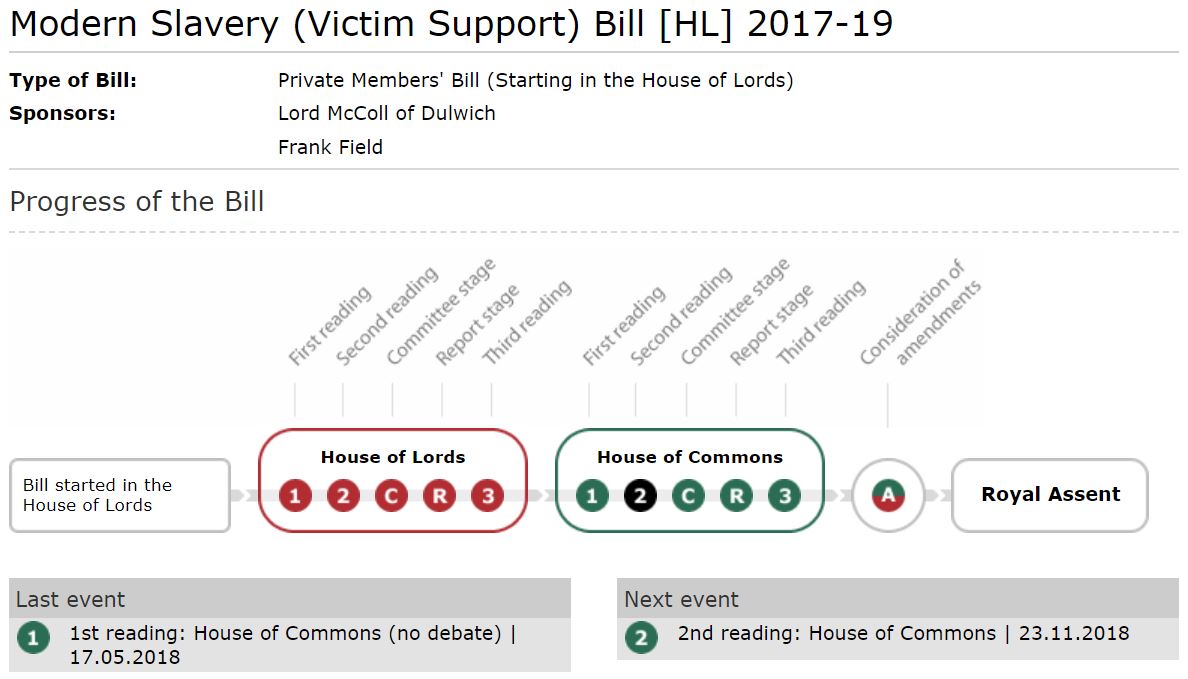